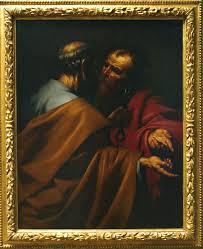 We’ve been reading St. Paul’s Letter to the Galatians, which was written about twenty or twenty-five years after Jesus’ Resurrection.  St. Peter and St. Paul met in Antioch. Peter got there first. He ate with the gentiles, enacting the vision-revelation he had about eating things the Law forbade. But when the conservative Jewish converts came, he suddenly turned kosher, sensitive to their scruples.

St. Paul found this out when he got to Antioch. Now, he had brought to faith in Jesus Christ a lot of women who prepared un-kosher foods and men with foreskins – and if that way of putting it makes us feel a bit uncomfortable, imagine what Paul’s converts felt when faced with the demands of the conservative interpreters of the Law.

Right now, Cardinal Mueller of the Office of the Doctrine of the Faith stands by the articles and the book he just published contesting Pope Francis’ openness to change in the current Church law about communion after divorce. This reminds us of St. John XXIII’s keeping Cardinal Ottaviani in that office – a determined man who opposed Pope John’s whole project.  So conflict is nothing new.

We know it, too, in parish organization, diocese, and daily life. We’re just like everyone else, blue or red.  What’s the difference between us as them?  It’s in the “handshake of friendship.”

We handle conflict this way: First, we’re not surprised; on the contrary, we expect conflict and contradiction. Second, we act in the conviction that the Holy Spirit is at work in every human being on the face of the earth – and especially in those who differ from or oppose us. The Spirit works in red and blue. And therefore, third, conflict is not an obstacle for us – it’s an opportunity. We can help those who oppose us to find out what it is the Spirit is working in them. WE do that be listening to them, carefully. That requires, of course, that we take the opportunity to be open, ourselves, perhaps even to changing our minds.

That’s a risk, of course. A risk taken, if it is to be taken habitually, by only those who do actually trust that they are not in control of their world or even of their own lives, but the Holy Spirit is, and likes doing it.

The ones among us who refuse this are like the “stupid Galatians.” There’s always some. Remember the three points and don't be one of them.