The following reflection is an adaptation of a homily I preached at the 10:30am Mass at St. Agnes Catholic Church in San Francisco, CA. We used the readings for the Sixth Sunday in Ordinary Time.

If you are reading a blog on the Ignatian Spirituality Institute website, I’d imagine many of you have heard a little bit about the life of St. Ignatius of Loyola. But did you know that St. Ignatius was examined eight times by the Inquisition? Unlike many other reformers from the 16th century, though, he chose not only to stay in the Catholic Church, but also to found a religious order in the church, the same church whose members questioned him, jailed him, and more than once ran him out of town. What on earth allowed him to do this?

As we set the scene, we ought to remember two things. First of all, it’s quite likely that, as a disciple of John the Baptist, Jesus was a marginalized member of the Jewish religious establishment. That’s why he began his ministry in the desert instead of in the Temple. Second, Jesus’ followers were probably marginalized people as well, the poor whom he called blessed at the beginning of the Sermon on the Mount two weeks ago. They may have come to hear him preach because they had nowhere else to go.

Jesus begins with a shocking statement: I have not come to abolish the law or the prophets. I have come to fulfill it. Like you, I have my mixed feelings about this religion, but I haven’t come to destroy it, even though it has hurt me and very likely it has hurt you. Rather, I testify: you will encounter God even here, a God who can powerfully transform you.

Difficult situations challenge our faith, and in these times, instead of running away, Jesus challenges us to move from the external to the internal. To go back to the story above, Ignatius got along well with Paul III, who approved the Jesuit order. His arch-enemy Cardinal Carafa became Pope next. When Ignatius found out, he turned pale and began to shake. The story doesn’t say out of fear or out of anger, but it touched him deeply.

What in your life has touched you deeply in these days? I’ll admit: I have to stop myself from checking the news on my phone too often. I’ve spent too much of my Jesuit life working with migrants and refugees, and the debate over the travel ban, which affects some of my classmates, makes me angry. Maybe it’s not the politics, but your job: something happened that has made you question your vocation, ready to pack up your things and walk out, disillusioned. Or perhaps it’s someone in your family: layers of hurt and pain may make you wonder if it’s worth the trouble to ever speak to them again.

Today Jesus offers us another way out of these cycles of anger, hurt, and pain: instead of beating your head up against the structure on the outside that you can’t control, or just holding it all in, he invites us to dare to enter in, to let God purify us in a way that will ultimately deepen our faith and transform us. Only then can we bring our gift to the altar. Perhaps the anger, hurt, fear, or pain is the gift itself, to pull it out of our heart, in order to hand it over to God, so that God may transform it into something that helps not just us but others as well.

In the past couple of weeks in my community we have been watching the Netflix documentary Llamamé Francisco about the life of Pope Francis. It really humanizes him. As you may know, he was provincial in Argentina during the so-called dirty war, and one episode shows the torture and murder of one of his close friends, a nun who stood up for the poor. After his term as provincial ended, the pain, doubt, and sense of powerlessness associated with his friend’s death accompanied him to Germany for his studies. One day he wandered into a small chapel and heard a Venezuelan woman praying. He asked if he could join her, and she pointed to the image in front of the church: la virgen desatanudos, Mary, untier of knots.  The pope broke down as the woman read the prayer in Spanish and couldn’t even voice his intention through his tears.

Something changed in him. When he returned to Argentina, he brought the image of Mary, untier of knots, to the people he served in the countryside and the barrios. A scene later on shows him with a woman in her home, assuring her that the Virgin will listen to her just as she listened to him. He was following Jesus’ example, just like the people who heard Jesus preach today, hurt though they were, who let God transform their hearts and use their pain to form a community that welcome hurt people just like them. In the same way, as a Christian layman, marginalized himself for just wanting to talk to people about God, Ignatius founded a religious order that is known for its work with the poor and marginalized.

Like the first disciples, Ignatius, and Francis, Jesus’ words continue to challenge us:

What do we bring to our experience of prayer?

What gift can we make of the hurt, anger, or disillusionment that we may bring?

What knot dare we ask the Virgin to untie?

Above all, if we let ourselves, how can we share what we have received, as agents of God’s healing and reconciliation in the world?

Here is the image of Mary, Untier of Knots, that I reference above in the homily. 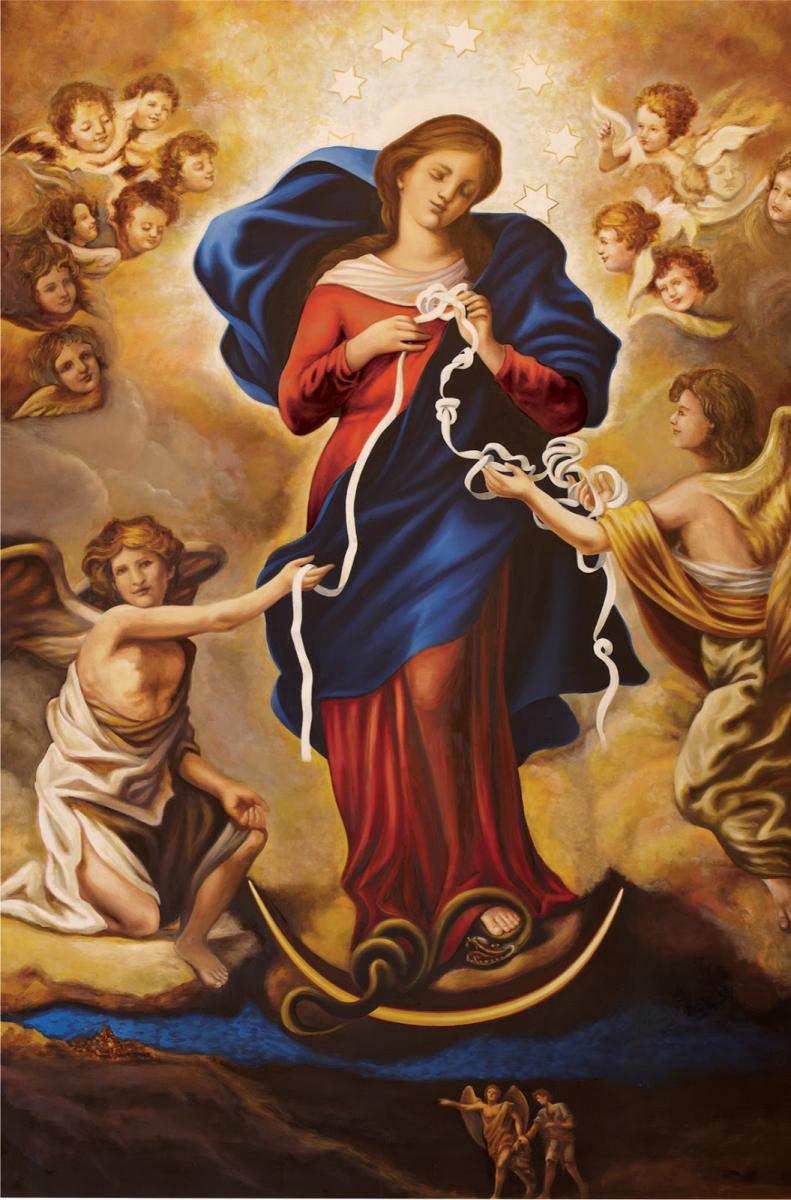