The following reflection is an adaptation of a homily that I preached at the 6pm Mass at St. Agnes Parish on January 8, Epiphany Sunday. The readings can be found on the USCCB website.

Three summers ago, I led a pilgrimage to sites related to the life of St. Ignatius. At that time, I was teaching at Jesuit College Prep in Dallas, and together with my colleagues, we walked nearly 200 miles over the course of ten days in Spain. I always get excited when I set out on a new adventure. In this same spirit, we enthusiastically begun, talking among ourselves excitedly while we admired the beautiful scenery, and the first day of the pilgrimage was very fun.

However, the Basque country where St. Ignatius was born has a lot of mountains, and although our first day of walking was very flat, beginning in the second day, we entered into the mountains. It got colder and the way got more difficult to see. I walked at the head of the group and tried to guide the others, but the more we climbed, we still did not reach the top. What’s more, fog began to envelop us from all sides, the front, the back, the left, and the right, until it eventually covered us. Thus the other pilgrims and I got anxious and, quite frankly, a little scared.

At its core, I would propose that the story of the wise men is a travel story. The story doesn’t say where the three wise men came from, but they must have made a long journey from somewhere faraway to see the Christ child. The story doesn’t even say why they made the trip, but just because they saw a star, they decided to follow it. Just like we pilgrims, I wonder if their journey at first seemed like a fun adventure, but got more difficult as it progressed, and that at times they felt a little anxious and scared. Speaking of anxiety, another character appears in this story, Herod, the king of Judea. He felt afraid when he found out the reason for the wise men’s journey. Possibly he feared the emergence of someone who would challenge his power. In contrast to the wise men, who wanted to do homage to the new life that the star pointed out, Herod wanted to kill this same new life. Fear is a powerful motive, isn’t it?

In the liturgical year, Epiphany marks the end of the Christmas season. For us too, our Christmas guests have gone home, and we have returned to work and our daily lives. At first, we may have felt a sense of relief that the holiday season was finally over, but after a few days, like mountain climbing, possibly we too have had moments where we felt enveloped in a spiritual fog, where we could no longer see the origin or the destination. St. Ignatius often compared the spiritual life to a pilgrimage, and that we are pilgrims on the journey. In the midst of that journey, days when we feel anxious and unsure will undoubtedly come, but this is not a sign that we are lost or have made a mistake, even though we feel that way.

If we try to trust this insight of Ignatius, that the life of prayer is not a way to run away from anxiety, then what can we hope to gain from prayer? Herod is a great counterexample. Because of the existence of the Christ child, he tries to kill his anxiety by killing the source of his anxiety. Even though he massacres the holy innocents, he does not succeed in killing the Christ child, and eventually dies without having seen him. In contrast, the wise men feel the same anxiety as Herod, but, in the midst of the difficult parts of their journey to follow the star, use it as an opportunity to hone their skills of discernment.

Some have hypothesized that the wise men were astrologers. In our modern society, we don’t much think of astrology and may even ridicule those people who believe in it, but in a certain sense, astrology is a good metaphor for discernment. Looking for stars in the midst of a dark sky often matches my experience of the spiritual life. To use a different metaphor, the tools of discernment can give us the courage to keep going on a journey that seems enveloped in fog and help us feel the grace of God there. They can also give us the wisdom to deal with the people and situations that we meet on this journey that threaten us.

At this point at the end of the Christmas season, where do you find yourself on life’s journey, and what situations are you experiencing? Has the contrast between fear and faith emerged in your prayer? Could these exact moments be places where the Lord is inviting you to hone your skills of discernment?

To return to our group in Spain, that day that the fog enveloped us ended up being an important moment of growth for us individually and as a group. Finding the way in the midst of the fog was very difficult and at some point or another we all got scared. Looking back, however, we came to realize that overcoming a challenge that no one expected became an opportunity for the group to bond. We could say that it opened our hearts to receive the gifts of the pilgrimage, and in fact there were many gifts, not only that we gave but also that we received from God on that journey.

When the wise men arrived to see the baby Jesus, Jesus drew out a spirit of reverence and generosity from them. The gospel tells us of gold, frankincense, and myrrh, their three gifts, but it doesn’t say what they received from Jesus. In this season, we pray for the same grace that, in our lives, when we encounter Jesus, we may offer him our most valuable possessions with generous hearts. Moreover, as people of faith, we approach God with open hands and open hearts to receive whatever gifts lie prepared for us.

Here is a picture of that foggy path below: 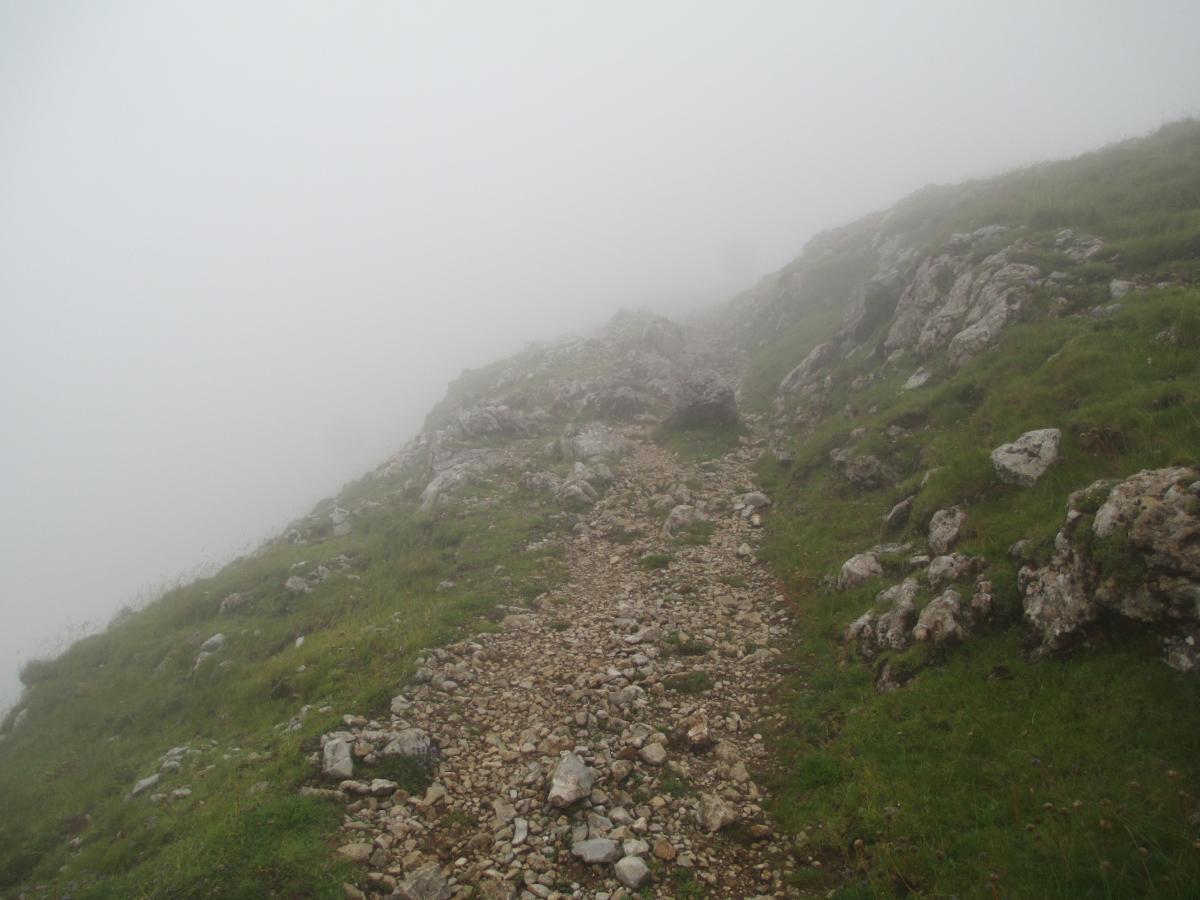