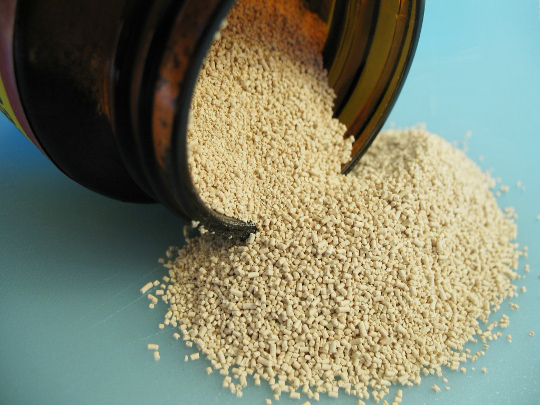 Like many people, much of the events of the past few days of my life have taken place against the backdrop of the Pope’s visit. Here in Pacific Time, when I wake up and go downstairs to get my first cup of coffee, I have encountered my brothers watching the addresses to Congress and the UN. Music from the vespers at St. Patrick’s Cathedral provided a soundtrack to my office hours at the University of San Francisco. This afternoon, as I was doing reading for my preaching course, I watched the Mass at Madison Square Garden, a more moving experience than many Masses I have attended in person. At a certain point I put down the book on preaching to see the real thing in action.

Here a thread from the Pope’s homily converged with something that has been building in my prayer. He spoke of the church as leaven in the city, a place where it is often hard to find God because of “el smog”. His question made me think: what does it mean to be yeast in our world? This image from the gospels does not immediately resonate with me.

My reflection brought to mind an experience yesterday at the entrance of the education building at USF. I was going to teach my class, a seminar on Science and Religion, when I ran into many of my classmates from the economics program where I am a graduate students. The contrast took me aback. In one setting I am “Professor Pitts” to a bunch of 20 year olds, the so-called authority who challenges them to develop their own positions on the role of faith and science in their own lives. Just that day we talked about doubt as an essential component of the life of faith. In another setting I am “Stephen” to a bunch of 23 year olds, who I frequently ask to explain economic concepts to me, but who seem to like having me around and who have been asking me lately about the Pope.

I had just come from the Jesuit community, where I frequently dine with my fellow Jesuits who more or less treat me as an equal. The night before I had a lively dinner-table conversation about the bizarre case studies that we all have to study when learning to hear confessions. They seem to enjoy the funny stories I bring from across the Bay. Moreover, the previous day I had met for the first time with a spiritual directee. I looked for this person initially as a professor; when the person was not listed teaching a course in the schedule online, I assumed the person was on a sabbatical, only to find out that I was directing one of the assistant deans, twenty years older than me, who described themselves as a “novice” at prayer but has carved an hour a week out of a busy schedule to meet with me.

Later that day, because of a private event I couldn’t dine at the Jesuit community, which has an incredible view and food to match, so I walked down the street to a grocery store instead, where I bought some food and ate outside. The experience made me laugh—trading the fine dining or a box of Triscuits and a plastic container of chicken salad. After our three hour night class, some of my fellow graduate students were going to a birthday party of our classmate in a local bar. I went with them, had a pint, and chatted with some of them while I watched others play shuffleboard. Several people thanked me for coming.

This morning, after waking up later than usual after staying out way past my bedtime, I received an email from one of my graduate school professors thanking me for suggestions for how he can improve his teaching, for I am closer to his age than that of most of my classmates. I had mentioned my high school experience to him in passing, and it had piqued his interest, so I dared to offer a few suggestions. He received them with humility and gratitude, and I hope that a dialogue has opened between us.

What common thread do I find in this rambling account of the last 48 hours? It’s easy for us to joke about our control issues and practice the discipline of passive surrender. But sometimes while God asks us to start there, God doesn’t want us to stop there. Certainly God asks us to take the time to pray, but then God also invites us to act out of our prayer, for while we may lack any formal authority, we don’t lack influence. Somehow in fact our influence is connected with our powerlessness. We can't tell people what to do or make them listen to us; we can, however, listen for their invitations, respond as we believe Jesus would, and offer invitations of our own.

People of all faiths and from all walks of life have responded to the Pope in these extraordinary past few days not because canon law has put him in charge of the Catholic Church or because he peppers his talks with authority claims but because he dares to practice this Ignatian discipline. He listens with compassion, he prays with sincerity, and then he acts out of what God reveals to him, with courage and humility, knowing full well that the world is watching. He seems equally at home comforting immigrants and admonishing the powerful figures in our world to take better care of the same immigrants, dining with heads of state and with the homeless, praying with interfaith leaders at Ground Zero and addressing the US Catholic Bishops in Washington, speaking to one person and twenty thousand.

With the Pope, let us pray too for a new way of seeing, of looking for the presence of God in the constellation of relationships in our lives, listening for God’s invitation, and then daring to respond—for me, this means to push a student a little beyond his comfort zone, to buy a drink for a fellow graduate student and ask him to tell me what brought him to USF, to offer a suggestion to a supposed professorial “authority figure,” to give the 19th annotation to an assistant dean. It means being equally comfortable dining in the Jesuit community, on the street outside the grocery store, or in a bar a little past my bedtime. It means that I can feel like a student, a teacher, a Jesuit at home in his house, or one of the homeless people I pass on the street, all within the span of about an hour.

Carol emphatically told me once that we don't play roles, so I will phrase the question a bit differently: what holds together all of these apparently disparate experiences? None other than our Lord, for more and more I sense that he finds me in all of these places. He invites me there, goes before me, accompanies me in the moment, and stays after me. Put differently, the yeast plays a small but crucial role in the baking process, but once it gives off the carbon dioxide, its job is done, for the dough has begun to rise. The taste doesn't even remain.